The estudiantina was a typical ensemble found in Smyrna and Constantinople in the early days of recording. Rather than the instrumentation of bouzouki and guitar that’s usually associated with rebetiko, the estudiantina was more of a mandolin ensemble, often including santouri, violin, and in this case, accordion. This beautiful sousta (a couples dance from Crete and other island traditions, as well as Istanbul) was recorded in 1907.

Here’s a violin and Santouri led estudiantina from Smyrna, the culturally vibrant port city on the Aegean coast of Turkey. The city was destroyed in 1922, resulting in a huge influx of immigrants into Athens, and to some extent, setting the stage for the formulation of rebetiko. The singer here is Yannis Tsanakas, a well-known vocalist who recorded with the Smyrna-based ensemble led by Yiangos Vlachos. Tsanakas died in 1914 or 1915. The manes is a form of modal vocal improvisation equivalent to an instrumental taxim.

Most aficionados of 78 rpm world music are already familiar with klezmer, the Jewish music that originated in Eastern Europe and was then developed further by immigrants in the United States. One of the great early orchestras was led by clarinetist Harry Kandel. Kandel was born in 1885, in what is now Ukraine. He was a conservatory trained musician when he immigrated to New York in 1905. He began playing on the vaudeville circuit, he then played in Sousa’s band before starting his own orchestra in 1916. He recorded his first session for Victor a year later. He retired in the mid-1920s to run a music store in Philadelphia.
His recordings are always fun, intense dance pieces. While Kandel was part of the new musical melting pot of America, his recordings still have an old world sound reminiscent of bands from other Balkan areas. 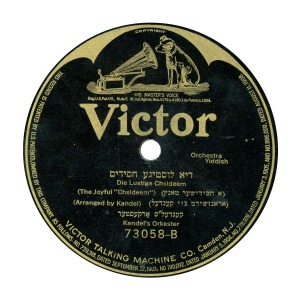 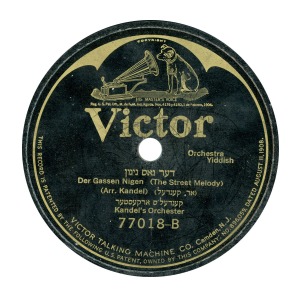 Here’s another interesting melody with a tonal center that shifts between F major and it’s relative minor, D. This song was a wedding processional used to accompany the bride and groom home from the temple. Jacob Hoffman is featured on xylophone. 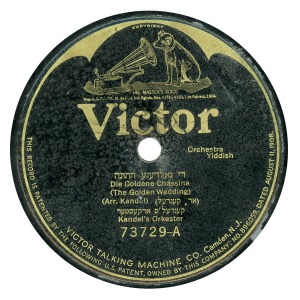 In the Jewish music of Eastern Europe, the body of modes or scales are called shteyger. This song is in ahava-raba, which is similar to a mode known as hijaz in the Greek and Turkish modal systems (Greek = dromoi, Turkish = maqam).

I’ve been slacking on posting to the blog lately, Kassidat and Longing for the Past took a lot of my record-related energy this year. But I did want to get something out there to wrap up the year, so I now present the lengthily-titled SEVEN INCHES OF LOVE: Twenty Obscure 45 rpm Records from Around the World (ShellacHead Annual 2013)! I had a lot of problems with hosting last year’s Annual on various free services, so this time around I’ll be making the compilation available via Bandcamp. It’ll be free for the first couple of months, but you can throw me a few bucks if you feel like contributing to the cause.

It’s with a sense of irony that ShellacHead is presenting an all vinyl compilation. It’s hard to argue with the antiquarian allure of old 78s, but there are plenty of 45s with intense, hardcore traditional music. Here are twenty heavy tracks from my 45 rpm collection, centered around Africa, the Middle East, and nearby locales, plus a few side trips. None have been re-issued, as far as I know. I’ve included a printable CD cover/tracklist and a booklet with some brief comments and full color sleeve images if you want. This collection should make a good spin for your New Year’s Eve party party, although things might get a bit weird. The 2012 Annual is available through Bandcamp as well, for a nominal fee.