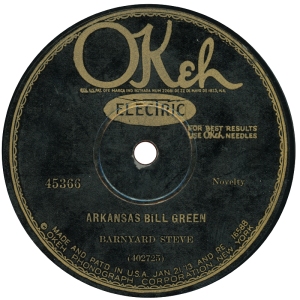 “They have down in Arkansas what they call the Bill Green, and that’s a square dance.
All the partners to their places, straighten up their faces for a Bill Green.”

I’ve been listening to old time country 78s (“Hillbilly”) for nearly 20 years, but I have bothered to collect only a few because so many of the recordings have been reissued on cd. This has always been a favorite record of mine, and as far as I know, it has never been reissued. Unfortunately, it’s not in great condition and I’m always on the lookout for a cleaner copy, but this is the only one I’ve ever seen! Recorded 83 years and 2 days ago in Dallas, on June 26, 1929. I think it’s the finest example of American old-time jaw harp playing on 78. I have no idea who Barnyard Steve really was, but I love how you can hear him imitating the dance rhythm of old-time fiddle bowing by using his breathing, rather than the striking of the harp’s tongue (or “twanger” as some old timers call it). He even calls out square dance figures with the harp still clearly set against his teeth.  It’s a shame that Barnyard Steve only made this single record. However, the flip side is a fantastic series of barnyard animal impressions, some of which are almost chilling.

I was contacted by Mr. Steve Austin, Barnyard Steve’s grandson, who provided me with the following details. Steve Edward Austin was born in Riddleville, Texas on May 29, 1890. He performed on the Orpheum Vaudeville circuit as Barnyard Steve, other times as Uncle Hiram and his Animals. Later, he became a regular performer on WFAA-AM in Dallas. He also toured high schools as a ventriloquist and even supplied animal voices for Walt Disney. According to his grandson, Barnyard Steve played no instruments other than the jaw harp, and was not, to his knowledge, a real square dance caller.
He died in Dallas, Texas on May 12, 1955. 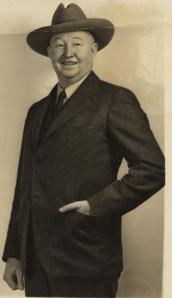 Thanks to Steve Austin for supplying these details and photograph! In honor of this new information I’m adding the B-side to this post. 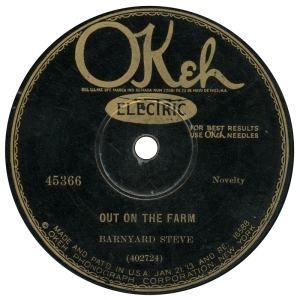